I realize my posts lately have been a lot of copying, pasting, and redirecting you all to other sites.  As I am trying to spread awareness for Ehlers Danlos Awareness month, I have also been battling an intense amount of fatigue, tachycardia, headaches, brain fog, neck pain, and have therefore, been honestly having some pretty emotional and frustrating days.  Thus, my posts have been pretty short recently.

I have wanted to post about my weekend since Sunday, but I knew it would be best if I waited for my body to start behaving better, so I could actually write coherently.

Last Thursday, my Aunt Mada and Aunt Laurie came from Cincinnati, and my cousin Jenny came from Kalamazoo to meet at my house.  We had plans to see Chris Trapper and Colin Hay at The Ark in Ann Arbor.

Let me back up a bit.  Six months ago, I did not know a thing about Chris Trapper, and I only knew that Colin Hay sang “that Australia song.”  Two days before I was diagnosed with EDS and POTS back in November, I had my first introduction to Chris Trapper.  Knowing, I was having an extremely hard time, my Aunt Mada sent me this,

Katie,
My second-favorite musician (behind Great Big Sea, of course) is Chris Trapper. He does a song called “Avalanche” which always makes me think of you and Allie and how you’ve both faced your adversity with amazing courage. The first verse is the part that makes me think of you two:“Starting to feel better, so bring on the weather
I feel I’ve prepared for anything…
We are the ones who are never afraid,
We need no rehearsal to dance.
We’re well aware this may be our last chance,
So bring on the avalanche.”
So, keep on facing that avalanche. You’re going to win.

I remember listening to “Avalanche” for the first time with tears streaming down my cheeks.  Throughout this year, my Aunt Mada has always had impeccable timing with sending me “pick me up” songs, and this time was no exception.  As I fell in love with “Avalanche,” and decided that the Avalanche I was facing was not going to define me, I started to listen to more Chris Trapper songs, and honestly, fell in love with his music.  I asked, Aunt Mada if she would burn me some copies of her Chris Trapper CD’s.  Within a few days, the CDs arrived in the mail.  Ever since I received that package, Chris Trapper’s music has filled my house quite often, and has gotten me through many tough days.

When my Aunt Mada saw that Chris Trapper was coming to Ann Arbor, she emailed my cousins, Aunt Laurie, and myself and wanted to know if we wanted to get tickets.  I did not commit right away because, I never know what kind of day I am going to have.  Plus, it was on a Thursday, and I have physical therapy on Thursdays, and knew it would not be feasible for me to go to the concert AND do my physical therapy.  Well, as the date got closer, I thought more and more about it.  I knew I wanted to go, but I had to figure out the physical therapy dilemma.  I spoke to my therapist, and I was allowed to come in another day, so that I could go to the concert.

The week before the concert, there were luckily still tickets.  I snagged one, and it was set.  I was going to get to see Chris Trapper, in the flesh, singing many of the songs that have kept me company for the last few months.

After I had committed to going and had my ticket, Aunt Mada sent me a link to Chris Trapper’s web page, and told me I could request a song to be played.  Well, of course I sent a request for “Avalanche.”  I said something to the effect of “I would love to hear Avalanche.  It has helped get me through some tough medical issues this year.  I can’t wait to see you and Colin Hay.”  I received a confirmation email that the “Chris Trapper team” received the request.

So that brings me back to last Thursday.  After Mada, Laurie, and Jenny arrived at my house, we immediately left for Ann Arbor.  After a VERY quick dinner at an Irish Pub, we made our way next door to The Ark.  Let me just say that just as I had developed a love for Chris Trapper’s music, I developed a love for The Ark the minute I sat down.  It has such an intimate atmosphere that makes you feel such a part of the show.

Shortly after we found our seats, out came Chris Trapper.  I fell into a schoolgirl-like trance as I watched him on stage, with his guitar playing many of the songs I love, and telling stories throughout the set.  One of the surprises is how funny the man is.  Throughout the set, I laughed, I cried, and I thanked my lucky stars that I was there in that moment.

Although, the show surpassed my expectations by a mile, I was disappointed by two things.  No “Avalanche,” and Chris Trapper was the opener for Colin Hay.  I would have preferred him to be the headliner, but what are you gonna do?  Since there was an intermission after Chris played, my Aunt Mada and I went to the bathroom.  Instead of going back to our seats, we wandered to the merchandise area, and found ourselves in a line to meet Chris Trapper!  I tried to think of what I wanted to say.  I thought I would become too tongue tied, so I told Mada, “You do the talking.”  Well, after about ten minutes of standing (I was silently pleading with my blood vessels to keep pumping blood to my brain) we were standing in front of Chris Trapper.

Mada told him she owned all of his CD’s, and she had traveled from Cincinnati to see him.  He was so gracious and thanked her.

Then, I told him, “Next time, you should really play ‘Avalanche.’
He said to me, “Oh, you are the medical….”
I think he was going to say “girl,” but I cut him off and said, “I’m Katie, the one who requested it.  I told him that since I was diagnosed with Ehlers Danlos and Postural Orthostatic Tachycardia, it has really helped me get through a lot of the last year.”

He apologized profusely, and said he thought I was going to be at the next night’s show, and it was written down for TOMORROW’s set list.  He promised he would play it for me sometime. He even asked how I was feeling.

I said, “Why don’t you just jump up there after Colin Hay is done and play it?”  He laughed and said, “Umm, that’s not how it works.”  Oh well, it was worth a try.   Mada and I ended up taking a couple pictures with Chris, and as we left, we thanked him again.

When Mada and I got out in the lobby, we squealed, did a little dance like jig, checked to see if the pictures turned out, and went to hear Colin Hay play.  Colin was HILARIOUS.  He could definitely make a living with stand up alone.  I was surprised I knew as many songs as I did, and thought his voice was AMAZING live.  All in all, the show was truly incredible, and as we left, I knew I’d be watching for Chris Trapper’s return to Michigan. 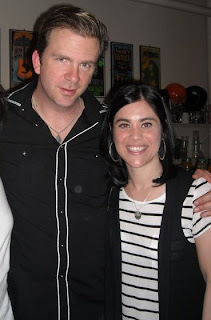 Chris Trapper and I match 😉 Aunt Mada, Chris Trapper, and me
Well, the story does not end there.  Since Wills and Kate were getting married the next day, Mada, Laurie, Jenny, and I decided to keep the fun going and have a Royal Wedding sleepover.  ?We woke at 6 to watch the nuptials, see the dress, and have our own version of Fashion Police….Ohhhh, Beatrice and Eugenie, what were you thinking?
I checked my Facebook while we were watching and had a friend request from Chris Trapper.  Of course I accepted, and a little while later, I had a message from him, apologizing again for not playing “Avalanche,” and assuring me (again) that next time, he will play it for me for sure.
I was so excited. And happy.  And so blown away by this man’s kindness that he took the time to send me a message.  But I was also feeling the effects of staying up late, getting up early, and using up all my “spoons” (aka energy).  I was feeling yucky and knew I needed rest and sleep.  After a good night’s sleep on Friday night, I woke up Saturday feeling somewhat human again, and replied to his message with….
No worries, but I will definitely take you up on hearing “Avalanche” next time I see you! Great set, I loved it. I will definitely be watching for your return to Michigan. Thanks for being so kind. Katie

PS…I must know..Did you play it last night?!

THEN, I received a response a little while later that said he thought about it but did not play it.  He said if I had responded to the first message earlier, he was going to offer to put me on his guest list for Friday night so I could hear him play “Avalanche.”

How sweet is that?  And someone tell me again why I waited so long to respond? Sighhhhhhhhhhhh

Even though I do not think I was in any shape to go back to Ann Arbor Friday night, I was definitely kicking myself.  I missed the opportunity to see him play two nights in a row AND hear “Avalanche” AND be on the guest list.  I really hope a second opportunity will present itself in the near future.
Chris Trapper’s music is impressive and beautiful in itself.  But I learned last weekend that his heart and the kindness he possesses is just as beautiful.  Thank you Chris Trapper for showing this ordinary girl from Lansing such compassion and thoughtfulness.  Thank you Aunt Mada for introducing me to his music.  I am a Chris Trapper fan for life.  And I will continue to face MY Avalanche.