I have been told I am now a zebra.

Why a zebra?
In medical school, students are taught to diagnose patients based on the condition that’s most likely. This idea goes along with the saying: “When you hear hoof beats, think horses, not zebras.” The horses are the likely explanation, and the zebras are less likely. A medical zebra, then, is a person with a rare medical condition, which is often called an orphan disease.

This is actually the EDS awareness ribbon: 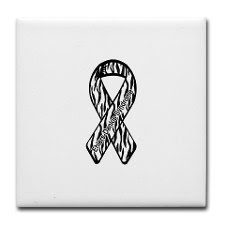 I think this is why I spent months seeing doctors.  Most were thinking horses, rather than zebras…until finally I found myself in Fort Wayne where a doctor realized I was truly a zebra rather than a horse.
With that being said, a fellow EDS’r shared this photo which I absolutely LOVE. It says to me that with the proper tools, the zebra can outrun the lion.